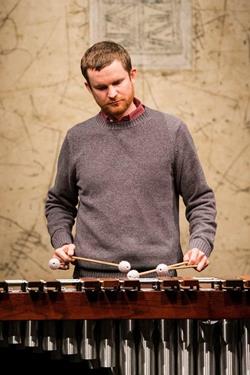 Dr. Andrew Richardson coordinates all aspects of the percussion program including teaching Applied Percussion, directing the OU Percussion Orchestra, Percussion Ensemble, and OU Steel Band, coordinating other studio ensembles, supervising the Percussion Methods course, teaching other percussion-related courses. Dr. Richardson also serves as Editor of the OU Percussion Press. He is an passionate educator and regularly visits universities and high schools throughout Oklahoma and the Great Plains region for performances and clinics. On the national stage, he has performed and presented at the National Conference on Percussion Pedagogy and the Percussive Arts Society International Convention. Additionallly, he has presented at both Oklahoma and Kansas Music Educator Association Conventions and is immediate past president of the Oklahoma Chapter of PAS. Dr. Richardson serves as principal percussion/timpani with the Norman Philharmonic and performs as a soloist and chamber musician throughout the OKC Metro area. He has articles published by Percussive Notes and his compositions are available through Tapspace Publications and Boxfish Music Publishing. 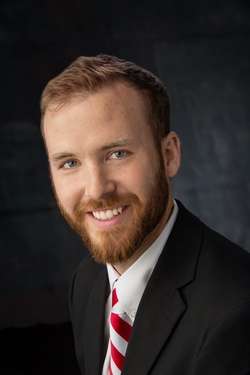 Benjamin Holmes (b.1991) is originally from Lubbock, Texas and earned his Bachelor of Music degree in Music Education at Texas Tech University. During his time at Texas Tech he was a member of the Percussion Ensemble, Symphonic Wind Ensemble, Symphony Orchestra, and Apocalypso Now Steel Band. While at Texas Tech, Benjamin was a percussion student of Dr. Lisa Rogers and Alan Shinn. Benjamin earned his masters in music performance from the University of Oklahoma in 2017 where he performed in the OU Wind Symphony, Symphony Orchestra, Percussion Orchestra, and Steel Band. Benjamin was a student of Dr. Lance Drege while at OU.

Benjamin is an active clinician throughout Texas and Oklahoma working in both concert and marching percussion. An active performer, Benjamin has performed all over the United states at the National Conference on Percussion Pedagogy (2013, 2014, 2017), PAS Oklahoma Day of Percussion(2016, 2017), Texas Music Educators Association Convention, PAS Canada Day of Percussion, and with the Blue Knights Drum and Bugle Corps. Benjamin’s latest compositions and arrangements are available from Tapspace Publications. Currently, Benjamin is the percussion coordinator/arranger for the University of Oklahoma bands and the Pride of Oklahoma percussion section. Benjamin proudly endorses Vic Firth sticks/mallets and Zildjian cymbals.