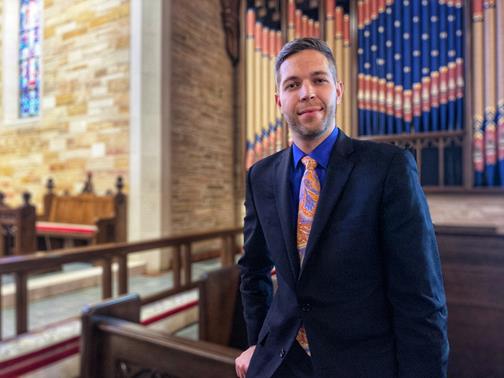 Adam Pajan is Lecturer in Music (organ) at the University of Oklahoma School of Music, where he teaches students in organ performance, organ technology, and church music. He received his DMA in 2014 at the University of Oklahoma following studies at Furman University and Yale University, earning the BM and MM degrees respectively under the tutelage of Charles Tompkins, Martin Jean, Thomas Murray, among others. His performing career has taken him across the United States, on five tours to Germany, England (including a performance at St. Paul’s Cathedral, London), and Switzerland. Dr. Pajan has been recognized as the first prize recipient in four national competitions (Poister, Mader, Schweitzer, and Westchester) and has been heard at conventions of the American Institute of Organbuilders, Organ Historical Society, American Guild of Organists, American Liszt Society, and multiple times on American Public Media’s radio program Pipedreams.

An enthusiastic director of choral and sacred music, he serves as Director of Music at St. Mark the Evangelist in Norman, OK, Artist in Residence at St. John’s Episcopal Church in Tulsa, OK, and was Conductor of the Oklahoma Master Chorale from 2015-2019. An active composer and arranger, his Preces and Responses Sets I and II are heard regularly at St. John’s Episcopal in Tulsa and on their widely-followed live stream. Adam’s first recording, Romantic Resonance, was released on the Raven label in 2018 and has received several four-star reviews. Performed on the Kegg organ at the Basilica of St. John the Baptist in Canton, OH, it contains works of the late nineteenth and early twentieth centuries. For more information, visit adampajan.com.