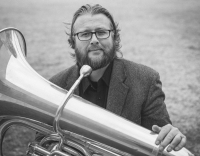 Professor Brian Dobbins began performing professionally in 1996 at Busch Gardens in Williamsburg, VA. He graduated from Virginia Commonwealth University in 1999 with a Bachelors degree in Music Education, and then began performing with the New Mexico Brass Quintet while working on his Masters degree in Music Performance at the University of New Mexico. In 2000, he won the principal tuba position with the Santa Fe Symphony where he continues to perform today. After receiving his Masters in the summer of 2002, Mr. Dobbins had the opportunity to spend the summer performing with the Santa Fe Opera. Later that summer he took a one-year position in Xalapa, Veracruz – Mexico, where he performed with the Xalapa Symphony Orchestra and taught tuba at the University of Veracruz. The following year Professor Dobbins accepted the Visiting Professor of Tuba and Euphonium position at the University of Oklahoma, and after three years of establishing strong high school and university studios, he accepted the Assistant Professor position at the University of Oklahoma.