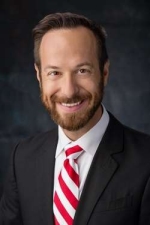 Dr. Brian T. Wolfe is the Assistant Director of Athletic Bands at the University of Oklahoma School of Music. His responsibilities include assisting with the Pride of Oklahoma Marching Band, directing the "Sound of the Sooners" Basketball Band, coordinating the Women’s Basketball Band, guest conducting the University Bands, and teaching courses in conducting and music education.