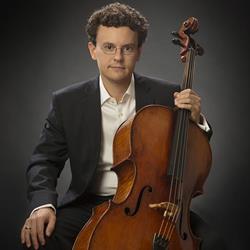 American cellist Jonathan Ruck enjoys an extensive and balanced career, performing as a soloist, chamber and orchestral musician. Born in Wisconsin to a musical family, he has been heard in venues throughout North America, Europe, Australia and the Caribbean. Festival appearances include recent engagements at the Oregon Bach Festival, Sanibel Island Festival, OK Mozart, Unruly Music, and as principal cellist of the International Chamber Orchestra of Puerto Rico. Jonathan currently serves as the principal cellist of the Oklahoma City Philharmonic.

An avid chamber musician, Jonathan Ruck is a core member of Brightmusic, Oklahoma City’s resident chamber music ensemble. In addition to offering a regular season of chamber music performances, Brightmusic presents a yearly summer festival, the first and only multi-concert classical music festival in Oklahoma City. Jonathan Ruck has performed as a guest cellist with the American Chamber Players and the Penderecki String Quartet, and alongside prominent artists such as David Shifrin, Rostislav and Luba Dubinsky, James Campbell and Daniel Blumenthal. He has given world-premiere performances of chamber works by Christopher Theofanidis and Sydney Corbett. As a founding member of the Dubinsky String Quartet, Jonathan was a prizewinner in the Fischoff and Coleman national chamber music competitions.

Jonathan Ruck earned three academic degrees from the Indiana University Jacobs School of Music, where his primary teachers were Janos Starker and Tsuyoshi Tsutsumi. He had the privilege to serve as the teaching assistant to both cellists between 2002-2005. Jonathan was a winner of the Indiana University cello concerto competition, and was twice awarded the school’s coveted Kuttner String Quartet Fellowship.

Jonathan Ruck performs on a cello built by Thomas Kennedy in London in 1820. He currently lives in Norman, Oklahoma with his wife, violinist Katrin Statmatis, and their two daughters, Arianna and Galia.