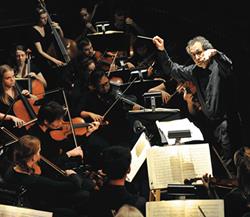 Dr. Jonathan Shames is Director of Orchestral Studies, Music Director and Conductor of the OU Symphony and Artistic Director and Conductor of OU Opera Theater. His previous positions included the music directorships of the Wyoming Symphony; the Olympia (Washington) Symphony; and the Seattle Youth Symphony Orchestras and its Marrowstone Music Festival. He came to OU from the University of Michigan, where he was Associate Director of Orchestras and directed the University Philharmonia and Contemporary Directions Ensemble.

Shames' work as musical assistant to Sarah Caldwell of the Opera Company of Boston (at age 19) led to his first conducting opportunities, when Caldwell invited him to lead performances of Puccini's Girl of the Golden West and Mozart's Don Giovanni. Since that time, he has frequently been associated with the company, leading several tours and Boston performances. Shames has performed with the Clermont-Ferrand (France) Conservatoire Orchestra, the Reno Chamber Orchestra, Louisiana Philharmonic, Richmond Symphony, Sewanee Festival and Pine Mountain Festival Symphony Orchestras. His performance of Anthony Brandt's opera The Birth of Something, with the Houston-based ensemble Musiqa, appears on Albany Records.

As a pianist, since winning a finalist diploma in the 1982 Moscow International Tchaikovsky Competition, Shames has performed in France, Finland, South Korea, and Russia, as well as across the U.S. Together with his wife, pianist Stephanie Leon Shames, he founded and served as artistic director of The Boston Players, a chamber music ensemble that performed from 1992 to 1997. He has recorded with the Moscow Chamber Orchestra and Cologne Radio Symphony, toured with the Novosibirsk (Russia) Philharmonic and the Radio and Television Orchestra of Belgrade, and appeared as soloist with the Seoul (S. Korea) Sinfonietta, Tomsk (Russia) Symphony, and in the U.S., the Boston Pops, the Reno Chamber Orchestra, and the symphonies of Seattle, Tacoma, Milwaukee, Indianapolis, Chattanooga and Springfield (MA). Shames' performance of Daniel Asia's Scherzo-Sonata, a work written for him, appears on Summit Records.

Shames studied piano performance at the University of Michigan with Theodore Lettvin and Leon Fleisher. He was a conducting fellow of the Tanglewood Institute in 1994 and has worked with Seiji Ozawa, Bernard Haitink, Gustav Meier, Gerard Schwarz and Samuel Jones. He has taught at Cornell University, SUNY-Binghamton, Rutgers University, the Chautauqua Institute, Oberlin Conservatory and Interlochen.