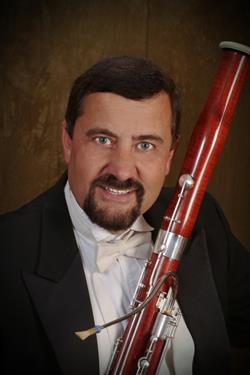 Irene and Julius J. Rothbaum Presidential Professor of Excellence in the Arts (Bassoon)

Rodney Ackmann is the Irene and Julius J. Rothbaum Presidential Professor of Excellence in the Arts at the University of Oklahoma where he also performs as a member of the Oklahoma Wind Quintet and is Director of the renowned Sooner Bassooners. Additionally, he serves as Principal Bassoonist of the Oklahoma City Philharmonic and performs as a member of the Brightmusic Chamber Ensemble. Mr. Ackmann previously served as Principal Bassoonist of the Tulsa Philharmonic and Tulsa Opera Orchestra for 22 seasons. Other performance affiliations have included the Saint Louis Symphony Orchestra, Solisti New York, Kansas City Symphony, Odyssey and Nova Chamber Music Series, and the Musica nel Chiostro, Spoleto and Assisi Music Festivals in Italy.

As guest soloist, Ackmann has appeared with the Saint Louis Symphony Orchestra, Musica Regala, Oklahoma City Philharmonic and numerous times with the Tulsa Philharmonic. He has also performed as soloist in the People's Republic of China at the Forbidden City Concert Hall, Beijing, and before an audience of 8,000 at Chongqing University. In 2015, he was one of only seven Americans, among 123 musicians invited from 43 countries, to perform with the 24/04 World Orchestra in Yerevan, Armenia He has recorded for Chandos, Mark Records, and Enharmonic, and has been heard on National Public Radio’s (NPR) “Performance Today”.

Mr. Ackmann has performed numerous solo and collaborative recitals at six recent conferences of the International Double Reed Society (IDRS), both in the United States and abroad. In 2011 and 2017, he led highly acclaimed performances of the University of Missouri Bassoon Ensemble and the Sooner Bassooners, respectively, at the prestigious Midwest International Band and Orchestra Clinic, accompanying soloists from the Chicago Symphony Orchestra. He has also presented pedagogical clinics as well as performed at the Midwest International Band and Orchestra Clinic and state music educators’ conferences in Texas, Michigan, Florida, Nevada and Missouri. Mr. Ackmann served as a juror for the final round of the 2012 Meg Quigley Vivaldi International Competition in Stockton, California.

Prior to joining the OU faculty, he served as Professor of Bassoon at the University of Missouri School of Music, and for seven summers as Visiting Assistant Professor of Bassoon at the Indiana University Jacobs School of Music. Mr. Ackmann's students have been featured on NPR’s “From The Top”, and won numerous awards in the Music Teachers National Association Competition, in both solo and chamber music categories. His students have also performed in Master Classes for annual conferences of the IDRS and the Midwest Double Reed Society (MDRS).

Mr. Ackmann holds the Bachelor of Music Education, Master of Music and Performer's Certificate from the Indiana University Jacobs School of Music where he studied with Leonard Sharrow and Sidney Rosenberg. He currently serves as District Representative for the MDRS, as well as Instrumental Music Coordinator for the Auditions and Competitions Committee of the Oklahoma Music Teachers Association.