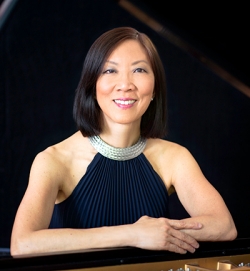 Instructor of Chamber Music and Accompanying

Professor Stephanie Leon Shames, who serves as a visiting instructor of music and accompanist for the OU School of Music, has performed internationally as a recitalist, chamber musician and concerto soloist. She has been a guest soloist with the Detroit Symphony, Seattle Symphony, Wyoming Symphony, New Orleans Philharmonic, and on tour with the Orchestra of Chur, Switzerland, among others.

As a chamber musician, she has appeared at numerous international festivals, including the Radio France-Montpellier and MIDEM Classique Festivals, the International Piano Festival at La Roque d'Antheron, the Bordeaux Festival, the Saarbrucken Chamber Music Festival, the Pine Mountain (MI), and Olympic (WA) Music Festivals. She has performed in Detroit's Orchestra Hall, Boston's Tsai Center, the National Museum for Women in the Arts in Washington D.C., Salle Gaveau, the Louvre Recital Hall, the American Conservatory at Fontainebleau, Victoria Concert Hall in Singapore, and London's Royal Academy.

While living in Paris, Ms. Leon Shames' collaborations regularly involved tours of France, Germany, Italy, and Great Britain and encased a broad spectrum of activities, including playing harpsichord, playing modern music, being the official accompanist at international competitions, as well as performing as a member of chamber music ensembles. Ms. Leon Shames has been featured on the B.B.C., Radio France, German radio, N.P.R., and French TV.

As an "Artistic Ambassador" selected by the USIA, Ms. Leon Shames has given masterclasses and solo and chamber music performances in Canada, Singapore, Indonesia, and throughout China. With her sister, a violinist, she has recorded two CDs of the music of Faure and Dvorak for Cassiopee Disques. With her husband and duo-pianist partner, Jonathan Shames, she co-founded The Boston Players, a chamber ensemble that drew upon Boston Symphony members and international soloists whose performances are still heard on public radio.