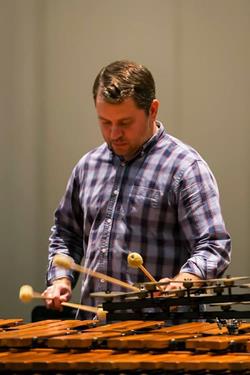 Dr. Ricardo A. Coelho de Souza was born in Belem, Brazil. He is a visiting instructor in world music and percussion at the University of Oklahoma. Ricardo holds a performer's certificate from the Carlos Gomes Conservatory, Bachelor and Master degrees from the University of Missouri, and a DMA from OU. Ricardo was a recipient of the BMI Student Composer Award in 1999 and at OU he received the Ronald J. Dyer Award in percussion, the Michael Hennagin Memorial Scholarship in composition, the Sutton Award in chamber music, and the Gail Boyd de Stwolinski Award for meritorious scholarship and musical performance achievements. Ricardo has been featured at the Percussive Arts Society International Convention, the Texas Christian University Latin American Arts Festival, and The International Music Festival of Para in Brazil. He has commissioned or premiered more than 25 works with percussion. Ricardo is actively engaged in composing and playing with orchestras, bands, chamber ensembles, popular music groups, and the Duo Avanzando with clarinetist David Carter.