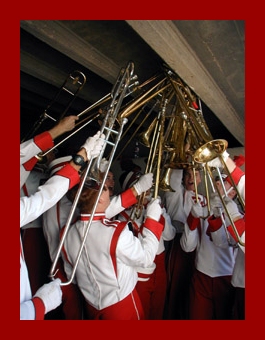 It gets really loud in the tunnels. Even the fans outside in the sunlight hear the noise, and sometimes they turn around to see what all the yelling is about.

Everyone is excited and standing up now, and it's crowded. Some of us are jumping up and down, and some are banging their plumed shako hats against everyone else's. The trombone players scrape their horns against a concrete beam stenciled with the simple word "PRIDE," while the saxophones work themselves into a wild frenzy with their instruments raised overhead. Those at the end of the tunnel keep glancing outside at the drum line, waiting for them to step off from the north goal line and begin the cadence. It's still noisy, and the massive crash of percussion can barely be heard in the darkness. Everyone screams and yells, but it soon becomes quiet as the band listens for twenty four counts of solo snare taps. Now on the fifteen yard line, the drums explode into a quick cadence as the loudspeakers announce the "Prrrride of Oklahoma!" We run out of the dim tunnels into the stadium full of 83,000 Sooner fans and realize how much louder it is out here, especially with the RUF/NEKS shooting their guns off a only few yards away. Suddenly the cadence stops, everyone's horn snaps up and the full 300-piece band projects in full volume the collective Sooner Spirit with its signature version of "Oklahoma!"

Of course, there is much more to the pre-game performance of the Pride of Oklahoma than the run-on. The conference flags, the twirler, and the strutting drum major are all well-recognized parts of the band. However, every member of the horn line can recall the feeling of running onto Owen Field for the first time and feeling the adrenaline rush of having thousands of fans clap and sing along with the band. It is the ultimate demonstration of state pride and school spirit as everyone joins in the songs "O.K. Oklahoma," "Boomer Sooner," the "O.U. Chant" and "Oklahoma!" 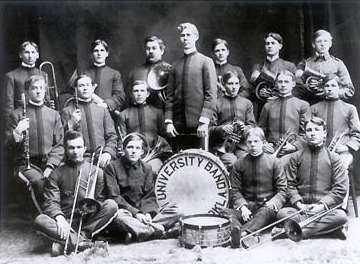 Unlike many other college bands, which began as military drill units, the Pride of Oklahoma had its beginnings as a pep band. In the early years of the 1900s, both townspeople of Norman and students of O.U. participated in a band that played for football games. Professor John Merrill started the first band in 1901, which was composed mostly of townspeople and disbanded after each football season. In 1903, Dean Holmberg directed a band at O.U. It was difficult to keep the early bands together after the end of the football season because there wasn't enough money to buy suitable music.

Lloyd Curtis, a cornetist, founded the first continuous student band in 1904. Curtis was only a freshman in the fall of 1904, but his enthusiasm and talent enabled him to lead a successful band program at Oklahoma for ten years. In the early years, the primary function of the band was to provide spirit and entertainment at athletic events. The band also gave concerts and participated in parades. In 1907 the band marched in a parade for the inauguration of the first governor of Oklahoma, and in 1913 made its first trip to Stillwater for the football game with Oklahoma A. and M. Following Cutis's departure, the leadership of the band returned to students. James Brill led the band for one year, followed by L. Ansel White. 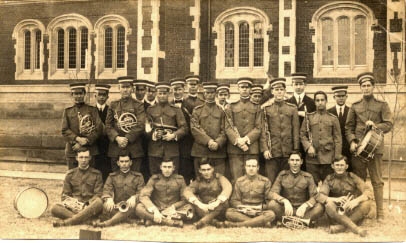 World War I brought a surge of patriotism and militarism to the O.U. campus as well as change to the band program. A military band was created for the first time, but after 1922 the military band and the university band were separate ensembles. From 1917 to 1927, Oscar J. "Daddy" Lehrer was director of bands at the University of Oklahoma. A Hungarian by birth, he was an accomplished violinist and composed numerous anthems, operettas, and miscellaneous instrumental compositions. Lehrer saw improvement in the band as a performance ensemble. Other directors during the 1920s, including Charles Eugene Springer, Arthur Nave, Roger Fenn, and John Stehn, also continued to improve the band in marching, concert, and military performances. By 1929, the band had established enough of a reputation to be invited to perform for a broadcast over WKY radio in Oklahoma City.

William R. Wehrend arrived at Oklahoma in 1929 as the first faculty member whose primary responsibility was to direct the band program. He was a showman who seized every opportunity to promote and publicize the band program. He was one of the first band directors in the country to start an annual high school band day event and contributed to the success and quality of Oklahoma high school bands. In 1934 he organized a publicity stunt to attempt the world's longest drum roll. Four drummers rolled in Holmberg Hall as members of Kappa Kappa Psi band fraternity provided food and oiled their wrists with rubbing alcohol. After ten hours, the four established a new world record. A significant development during the Wehrend years was the admission of women into the band program in 1934, much earlier than most other college bands. Wehrend's bands performed pageantry-style halftime shows at football games, playing popular tunes and marching picture formations on the field.

The great accomplishments of the Pride of Oklahoma during the 1930s are even more impressive in the face of the extreme hardship of the times. As individuals, band members often had to struggle to raise funds for the program and even to stay in school. For the band program to succeed as it did is a testament to the resiliency and optimism of the people of the University of Oklahoma. 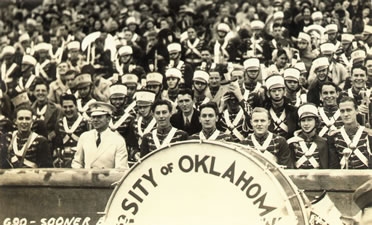 After World War II, the Pride continued to perform elaborate halftime shows and participate in events for high school bands across the region. Leonard Haug, director from 1945 to 1962, spent much of his time developing halftime shows centered on themes that would incorporate well-known songs of the day. The band's pageantry shows included animated figures and half-time score formations. The success of the Sooner football team in the 1950s provided much publicity for the Pride. The band traveled to several bowl games, appeared on national television, and performed at locations around the state. In the spring of 1961, the Pride traveled to Washington, D.C. to march in the annual Cherry Blossom Festival Parade. The crowd loved the arrangement of "Oklahoma!" and the undeniable spirit of the band. Afterwards, the band received the grand prize as the best overall unit in the 200-unit parade.

A significant change in the Pride's performing style came in 1962, when Gene Braught took over the marching band. He changed the style from pageantry to precision marching, although at times he combined the two styles. The 1960s saw increasing criticism of marching bands both from the professional world and from college sports fans. Braught increased the number of contemporary works played by the concert band and experimented with different styles in his halftime shows. During this time the Pride performed its most intricate marching routines, creating geometric shapes and lines for dazzling kaleidoscopic visual effects. 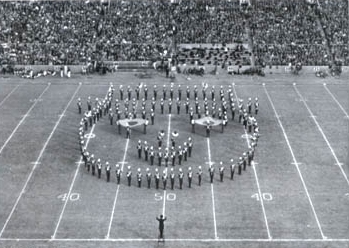 Another change in show style came with another new director in 1971. Gene "Coach" Thrailkill led a transition to a new show design concentrating on the sound of the band. Marching drill became a tool to present the music to the audience in the front sideline stands and the band began to play a wider range of music, including rock and Broadway show tunes. The band increased in numbers and volume to project music to a larger audience. Thrailkill also included the signature strutting drum major and developed the current pre-game performance. The band traveled to four straight Orange Bowl games in the mid-1980s. The Pride was also awarded the prestigious Sudler Trophy, recognizing the band as one of the top programs in the country. Additional faculty joined the band program, including William Wakefield and Roland Barrett. Barrett became the arranger for the Pride, and the present sound of the band is a result of his understanding of sound and his skill at adapting tunes to fit a marching band.

The band continues its traditions of indomitable spirit and cutting edge performances. "Boomer Sooner" still rings out at the end of each rehearsal, and that song is still the defining element of the University of Oklahoma. Maybe that is why Sooner fans love the band so much: There is nothing that can compare to the first "go-go" at a football game when the Pride of Oklahoma marches the interlocking "O.U." down the field playing "Boomer Sooner!