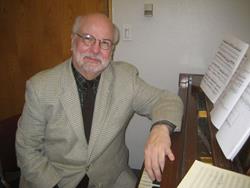 Dr. Marvin L. Lamb is Henry Zarrow Presidential Professor of Music Composition and former Dean of the Weitzenhoffer Family College of Fine Arts at OU. Lamb's compositions have been performed widely in Europe, North and South America and Japan. Lamb has been featured on PBS broadcasts in New York, North Carolina, Pennsylvania, Tennessee and Texas and has received commissions from the Dallas Symphony Orchestra, the Knoxville Symphony Orchestra, the New York Chamber Orchestra and the Idaho Symphony Orchestra. His works have been performed by the Czech National Symphony, the Orchestra del Teatro Colón in Buenos Aires, Argentina, as well as the Atlanta, Dallas, Knoxville and St. Louis symphony orchestras, the New York Chamber Orchestra, the Cabrillo Music Festival Orchestra, the U.S. Army Band and the Nashville Contemporary Brass Quintet. Lamb has received fellowships and teaching awards from ASCAP, the Mellon Foundation, Meet the Composer, the Texas Composers Forum, the Tennessee Arts Commission and the National Science Foundation. He has twice received composition fellowships to the Charles Ives Center for American Music. Lamb's vocal, chamber and electronic music is published principally by Carl Fischer and is included in the Fleisher Collection of the Free Library of Philadelphia. His music is recorded on The Saxophone Alone by concert artist Neal Ramsay, Music from the Meadows (Redwood Records), The University of New Mexico Brass Ouintet (Crystal CD), Heavy Metal (Mark Records), and Paul Freeman Introduces... (Albany CD). Lamb's articles concerning arts education policy, new music and new music ensembles have appeared in numerous jouirnals. As an arts consultant, Lamb has served in a leadership capacity for educational organizations at the state, regional and national levels, including as a senior evaluator for the National Association of Schools of Music. Before coming to the University of Oklahoma, Lamb was Dean and Yeager Professor of Music at the School of Music of Baylor University in Waco, Texas. 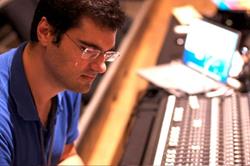 Dr. Konstantinos Karathanasis is a Professor of Composition and Music Technology at the University of Oklahoma School of Music, and a Stavros Niarchos Foundation Fellow for 2020. He writes music for fixed media (both acousmatic and soundscape), instruments and live electronics, and mixed media. He has also collaborated with visual artists to create sound installations and multimedia compositions. He draws inspiration from Poetry, Artistic cinema, Abstract painting, Mysticism, Greek Philosophy, Mythology, and the writings of Carl Jung and Joseph Campbell.

Dr. Karathanasis has been elected twice as the Vice President for Membership of the Society for Electroacoustic Music in the US (SEAMUS). He directs the OU School of Music Computer Music Studio and the Music Technology curriculum.